You are here: Home / Uncategorized / REAL MEN MIGHT EAT QUICHE 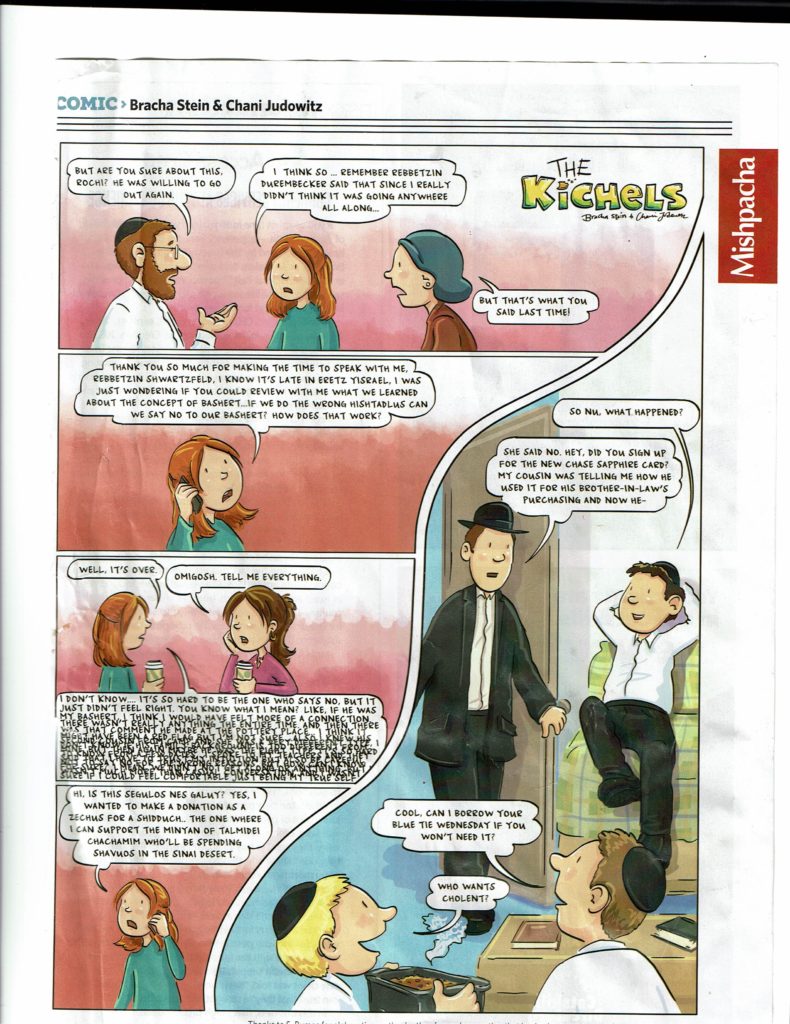 “She said no. Hey, did you sign up for the new Chase Sapphire card?” said Mr. Anonymous-Yeshivah-Bochur-Number-One (herewith referred to as AYB1) about Rochi Kichel who had finally axed the shidduch after a series of uninspiring dates. AYB1’s anonymous friends (ABY2 and ABY3), accept this with equanimity and quickly segue into a gripping conversation about credit cards and the availability of AYB1’s blue tie, while being gastronomically sustained by the ubiquitous bochur cholent.

In this Kichel cartoon, there were no little bubbles over the speaker’s heads to tell us what they were thinking so we don’t know if AYB2 was thinking, OMG, he is so cool about her saying no. When that girl said no to me, I couldn’t get out of bed for a week. It must be because he is a real man, whereas I am just a wimp. Or whether AYB3 was thinking: Gosh, what if the girl I am dating right now does that to me? Especially after I told her about what happened to me in the fifth grade! That’s it. I’m playing it cool from here on out and not sharing anything real with her again.”

Of course, analyzing the long-suffering Kichels and their potential sons-in-law to death might not be that great an idea. Cartoons can be interpreted in many different ways. Maybe AYB1 was thrilled that Rochi said no, because he wasn’t too excited about her either and she saved him the trouble. And of course, AYB1 does not have to keel over wailing in front of his friends to prove he is upset about this. Perhaps he needs time to process his feelings on his own or perhaps he chose to discuss the whole issue privately later with a friend or mentor. And perhaps the cartoon’s point was not AYB1’s lack of emotional expression but something else entirely.

At the same time, the contrast between Rochi who spent hours in lengthy DMCs on one side of the page, with AYB1 and company skittering neatly around any type of emotional discussion on the other, was too good an opening to miss.

Western culture has long typecast males as unfeeling cavemen-like creatures who at their most articulate tend to grunt in one-syllable sentences. These are the kinds of guys who say, “It’s not true that men don’t have feelings! For example, sometimes we feel hungry!”

This Western style macho man is the kind of guy who thinks that if his wife is insulted by being given a vacuum cleaner for her anniversary, that is just an updated version of Newton’s law of e-motion: for every man’s action there is a woman’s overreaction.

But that insensitive tough guy who can’t wrap his mind around anything more profound than if the oil in his car needs to be changed, has never been the model for Jewish men. Jewish men regularly say things like, “G-d, be gracious with me, for I am broken (Tehillim 6:3).” Or, “My heart is filled with sadness” (Tehillim 13:3), and, “My soul yearns and thirsts for You” (Tehillim 63:2).” They say, “I am sick with love” (Yedid Nefesh). And these words are not muttered embarrassedly under one’s breath. They are enshrined in our texts — entreating each of us to tap into the wells of emotion underlying each word.

The problem with feelings like sadness, inadequacy, and loneliness — which rejection often awakens — is that they don’t just disappear when we ignore them. Instead they tend to slither underground, where they fester — only to reappear at a later date in another reincarnation — perhaps as cynicism, anger, self-loathing, or tiredness.

And what’s more, for some weird reason, you can’t really choose which feelings you want to feel. If you disassociate yourself from one feeling, you often can’t feel much of anything else either.

When, sometime (in the hopefully not-too-distant future) ABY1 is married (definitely not to Rochi Kichel…) and his wife tells him that she feels rejected — say a group of good friends get together without inviting her — will Reb AYB1 say to her, “Whatever. Just get over it already!”?

When Reb AYB1’s son seems down and mutters something about his best friend choosing someone else as his partner for the science fair, will Reb AYB1 slap him on the back and tell him to be a man — thereby passing on a legacy of ignoring feelings?

And the real clincher: When AYB1 is rejected again — a friend whose covert rivalry he senses but is not really aware of — is chosen for a coveted position that he has been longing for, how will he react? Will he:

3. Will he be able to acknowledge how deeply hurt he is, and then reach into the depths of his neshamah to find the truths that can give him the strength to emerge more connected to Hashem and the people around him?

It’s fascinating to think about how so much of Freudian psychology rests on the theory of repressed or sublimated feelings that are roiling under the surface, far even from our own consciousness. One might even say, as psychanalyst, Jean Baker Miller, did, that we came to need psychoanalysis (and by extension, the many schools of psychology that it birthed) “precisely because certain essential aspects of [our] experiences (feelings of vulnerability, weakness, helplessness, dependency, and the basic emotional connections between an individual and other people) have been unacknowledged, unexplored, and denied.”

Perhaps, if we didn’t expend so much energy in burying our emotions so deep within, but were able to process and discuss them, we could save ourselves years of agony. And it is often this Western macho image of men — the recalcitrant husbands leaving skid marks in front of marriage therapist’s doors after being dragged there by their wives, for example — which lead us astray.

In the Jewish model, our heroes are intimately aware of the entire range of human emotions — even as they struggle to rise above them. Sifrei mussar are full of insights into human foibles. How did these great authors know so much about our own puny lives — our pettiness, and vindictiveness, our insatiable desire for kavod, and the mean little pleasures we eke out of snide or sarcastic comments? Weren’t they light years away from this kind of small-mindedness?

But real avodas Hashem requires an openness to a full range of emotions and experiences. Rav Izik Sher ztz”l, in his sefer, Leket Sichos Mussar, explains this in relation to the surprising Midrash about how Avraham’s “eyes [were] pouring tears” as he reached out to slaughter his son. Why was Avraham crying? Wasn’t he happy to do this enormous mitzvah? Didn’t he believe that this was for the best? Shouldn’t he have been dancing for joy — not crying!?

But, Rav Sher ztz”l, explains, if Avraham would have been a religious automaton, an obedient robot who would have said, “Oh, you want my son? Here he is! No problem,” the Akeidah would have been meaningless. It was precisely because he cried, because he was a real human being, who loved his son with all his heart and soul, that made the Akeidah so monumental. For this reason, Rav Sher says, Hashem drew out every emotional nuance from within Avraham’s heart. I want Yitzchak, your only son, your beloved son, the one whom you thought was going to carry on your legacy. It was the tears running out of Avraham’s eyes, the searing pain in his heart, which made him human, and at the same time, made him great. If we gloss over our pain, denying, negating, or disassociating, we lose the opportunity these emotions present to know ourselves on a deeper level.

While Judaism scorns the inarticulate, unaware, disconnected macho man of Western world, in our daily lives we do tend to relegate emotion to the womenfolk. “Hi, Shloimie! So how is shiur? Happy to hear. Let me see if Mommy’s around.”

The Biblical word to describe authentic, emotional talk is sichah. Sichah is not about transmitting information, or giving directions. Discussing baseball scores or credit card points, as scintillating as such a discussion might be, also probably does not count as sichah.

Sichah is a cognate of words like siach ( a small bush or plant, easily uprooted, which grows spontaneously), suach (a burrow or small hole), vsach (downcast [eyes]), beit hashechi (a part of the body which is concave), and it’s about being open and vulnerable. At its most profound level, sichah means prayer, as when Yitzchak went lasuach basadeh — which Chazal connect to the poor person who wraps himself in prayer and pours out his heart before Hashem (yishpoch sicho).

Sichah between people is a redemptive kind of speech. It’s about being receptive to other people’s pain and honest about revealing one’s own vulnerability. If your heart is filled with worry, Chazal tell us, it is sichah — sharing with someone else what you are going through — that can take away some of that pain.

Women excel at this kind of healing, conversational flow. Not surprisingly — since, Chazal tell us, they took nine out of the ten measures of sichah that came down to this world. And women often have a conducive social system in place to engage in sichah — witness Rochi Kichel who, in contrast to AYB1, spends hours rehashing her feelings and experiences with a whole network of confidantes.

It is also true that the Mishnah clearly tells men not to indulge in “too much” sichah with women. Maharal goes to great lengths to make it clear that this injunction in no way negates the love a man should have for his wife, nor does it say anything negative about women. Al tarbeh sichah, Maharal makes clear, is not an assessment of women’s worth, but a message for men about how to be a man. Hanging around in women’s sichah land — a place of lack (vulnerability and openness) — is apparently detrimental to the defining traits of the male force (which the Maharal identifies in other places as strength, impermeability, obligation, and responsibility).

At the same time, at least one kav is still there for the taking. As parents and educators, perhaps we don’t want to enshrine Mr. Macho Man — who is cool with rejection — into our son’s consciousness. Being a Jew requires a full-range of human emotions — the painful and messy ones, as well as the pure and elevated ones. We might want to teach our sons that while real men might not eat quiche, they do feel pain, and instead of running away, avoiding, disassociating, or mocking this pain, by allowing ourselves to be human and to feel — and by sharing our vulnerabilities with others, in sichah — we can perhaps merit to serve Hashem “with all our hearts.”

Miriam Kosman is a lecturer for Nefesh Yehudi and teaches Torah to hundreds of Israeli university students each week. She is the author of Circle, Arrow, Spiral, Exploring Gender in Judaism. This column originally appeared in Mishpacha magazine the week of June 26,2019.