You are here: Home / Book Review / Are Jewish Women Second-Class Citizens?
The following is an insightful article written in response to my new book, Circle, Arrow, Spiral: Exploring Gender in Judaism. It was first published on the Jewish Values Onlinesite, by Dr. Rivkah Lambert Adler. 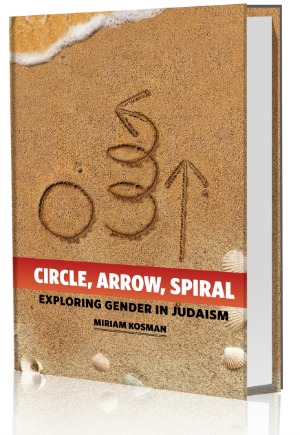 As a result, I always look at Jewish issues through the perspective of gender.In my early years as a newly-religious Jew, gender issues occupied a huge amount of space on my hard drive. At the time, there were just a handful of books available in English about the role of women in Judaism. And every one of them was more unsatisfying than the one before. Written by men, they all touted the same religious goals for every Jewish women – get married, raise Jewish babies and revel in your role as the center of your home and the support system for your husband. To read these books, you would conclude that this was the only role traditional Judaism offered to women.

I found these books wholly inadequate. Women who want to be stay-at-home mothers are to be praised. But really, that’s the only option?! What if you aren’t married yet? Or you don’t have kids? Or you can’t have kids? Or you had kids but they’re grown? Or you were married but now you’re divorced or widowed? What if you don’t have the temperament to be a stay-at-home mother? What if your family needs your income? What if you have other talents and ambitions that long to be expressed? The early books didn’t address any of these situations. By exclusively lauding a traditional role for women in Judaism, they did not speak to me.

In 1981, Blu Greenberg published “On Women and Judaism: A View from Tradition”. Reading it made it possible for me to breathe again. Greenberg acknowledged what previous authors were unwilling to acknowledge – that lots of women have issues with the singular role of women in traditional Judaism.

Circle, Arrow, Spiral is a serious inquiry into whether men and women are equal in Judaism and what it really means to be male or female in Judaism. Historically, there have been two approaches to these questions. One approach, often seen as apologetics by its critics, argues that men and women are equal in the eyes of God but have differentroles. The other approach has been to openly declare that Judaism treats women as second class citizens and to demand change.

Kosman delves way beyond these simple approaches to a deeper reality about gender that lies at the core of Judaism. She argues that, at its core, masculine and feminine polarities are a central organizing principle of Judaism. She quotes concepts from Kabbalah, Judaism’s mystical tradition, from Chassidut, from the Talmud and also from contemporary secular scholarship to make her case. She’s after no less than a paradigm shift in the way we think about gender and Judaism.

Judaism has famously been called, “A feminine religion with a patriarchal veneer.” For decades, I found comfort in that more nuanced approach. Kosman goes even further.